Picture this in your mind… A backpack-clad student is riding his bike to school on a designated “Safe Routes to School” multi-use sidewalk adjacent to school property.  He notices a car pull up to a stop sign, which intersects the multi-use sidewalk.  He sees the driver look right at him, then look to the left toward oncoming traffic. 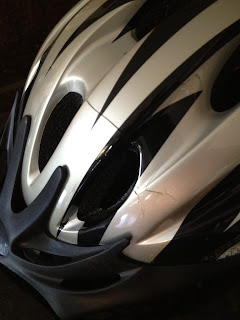 As the student crosses in front of the car (there was no stop sign on the multi-use sidewalk), it suddenly accelerates and cranks the wheel to the right.  The bicycle's pedal was bent under by the impact with the license plate and the bike was thrown half-way into the first lane of the 7 lane divided road.  The student was thrown onto the hood of the car with such force that he bounced all the way to the windshield then he fell off the car.  The his head hit so hard it split his helmet!

The driver of the car got out to make sure the student was not injured and provides him with his contact information stating repeatedly he'll take care of everything.  As the driver went back to his car to leave the school's parking lot attendant stopped him and asked he stay until the police arrived.  Who knows why the driver was in a hurry to leave.  It’s a good thing the police and EMS arrived within a few minutes.

After a thorough once-over by the paramedics, they were pleased to report that the child is understandably seriously shaken; yet fortunately, no injuries were apparent.  A sigh of relief could be heard from the ever-growing crowd that was gathering.

The driver told the police he saw the bike approaching, yet he never looked back to see where it was before he took off from the stop sign.  He went on to say he wasn’t a bad guy and he never meant for this to happen.  He repeatedly said to the cops he would take care of the damage.  He didn't want to tarnish his good reputation.  He wanted to keep his insurance company out of this.

The student is on the #2 cross-country team in the nation and takes his training seriously.  So as you would imagine, his bicycle was not inexpensive.   The helmet is worth about another $150, as is the speedometer.  With this indication in hand of what it might cost to replace the bike if it could not be fixed, the driver decides to turn the claim into his insurance company, GEICO.

Without getting a statement from the student or reading the police report, GEICO immediately denies the claim.  To add insult to injury, the driver of the car is now demanding the student he hit pay for the damage to the car! 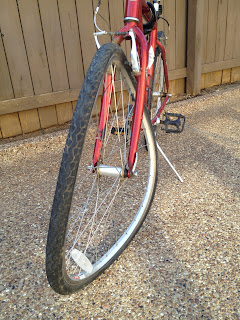 The basis of GEICO's denial and the driver's request for payment is thier interpretation of State law which says the bike should have been riding on the 45mph- 7 lane divided road, and not on the designated multi-purpose sidewalk as allowed by city ordinance.  According, the student was clearly at-fault because he was more than 50% negligent, in their opinion.  Furthermore GEICO, says if you want to ride your bicycle on the sidewalk you must only travel in the same direction as the cars on the road!

The actual quote from the GEICO claims rep was, "The (driver at a stop sign) would have had the right of way because (the bike on the sidewalk) was riding the opposite direction of traffic (on the road).”

The student doesn’t have the resources to pay for both his bike and the damage to the car.

PS. I can never replace my son, and I could not be any happier that he was not seriously injured.  However, who would ever imagine both the driver and GEICO could steep to such a despicable lows.  Who wants to stand up with Kyle and me and fight the driver and GEICO?

P.S.S.  If you believe GEICO was irresponsible in how they handled this claim by not properly investigating it, please send an email to the Texas Department of Insurance at ConsumerProtection@tdi.state.tx.us (reference GEICO Claim #0452598921010017)

UPDATE: 9/28 A GEICO claims manager was moved to call me as a result of my complaint with the department of insurance.  He proposed to pay for HALF of the damage after they send an adjuster out to survey the damages... (I so wanted to ask him if that would be for the front half of the broken helmet or the back half!)  Needless to say, I declined his offer.  After which he told me that according to his records the manager is now saying the original adjuster said I was un-responsive and unwilling to provide them a statement and that's why they denied the claim! (if that's the case, then why did they originally say it was because of the direction of travel on the sidewalk?) I asked him to go listen to the recording of our conversation.  He said he can't listen to the recording because GEICO does not record its claims calls.  This is absurd!

UPDATE: 9/29 Great news!  The professional technicians at Performance Bicycle performed a thorough assessment of the damages to the bike.  Using the latest technologies they made multiple measurements and determined the frame was not in perfect alignment, however, it was within acceptable tolerances.  Unless they find hidden damage while making the repairs the cost should be less than $300.

I still can't figure out why GEICO immediately denied the claim rather than investigate it by taking statements, reviewing the police report, and reviewing damage estimates.

I guess it is like the story goes, you get what you pay for!

Posted by bradypolansky.com at 6:52 PM