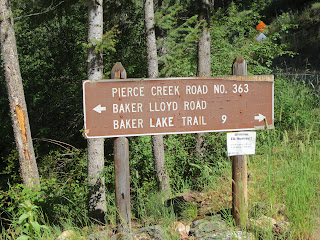 How many times have you read a headline about a hiker getting mauled by a wild animal?  How many stories do you read regarding hikers falling off the side of the trail to their deaths?

How much you want to bet that local journalists surrounding the National Parks and Forrest Systems have function keys programmed with macros assigned to spit out text for the more common ways hikers die on the trails.  The way I figure it, had our party been mauled by the mountain lion we encountered, the reporter in Missoula, Montana would have simply typed, “Four businessmen from around the country died today on the Baker Lake trail when…” (Then he or she would hit the <F12> key to complete the grizzly details of a wild animal mauling.)

That said, I’m confident that no one has ever written about a golf cart careening off the top of a mountain.  There is no function key for that! 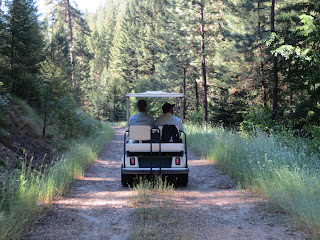 Look, I can’t make this stuff up!  Here’s what happened… Four of us (To protect the innocent we’ll call the others Scooter, Woody and Roger) had a free morning during a recent conference in the western mountains of Montana right on the property line of the Bitterroot National Forest.  The place we were staying at had golf carts for the guests to use to get around the grounds and tool around a logging trail bordering the property.

Maintenance topped off the fuel tanks of two golf carts and we set off on what we now call the Baker Lake Expedition.

We didn’t really realize the trailhead for Baker Lake was 12 miles up the side of a mountain via a working logging road.  Two hours after leaving the property, the golf carts made it up the side of the mountain climbing from 4,200’ to nearly 7,000’.

From the trailhead we set out on foot to find Baker Lake.  I had the trail map, my Garmin GPS and carried a pack with sunscreen, Tylenol, Benadryl, cookies, trail mix and several bottles of water just in case.  After about 1.25 miles of strenuous hiking the others were falling back.  So I decided to forge ahead, find the lake, and report back how much farther it was.  Turns out the lake was only another quarter mile up, or 1.5 miles from the trailhead, nearly on the Idaho border 8,000’ above sea level. 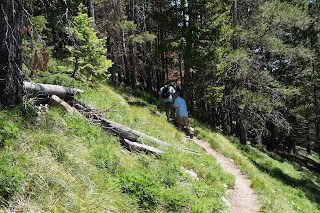 About fifteen minutes after setting out by myself I came upon the lake.  It was crystal clear and stunning.  I headed to my right where there was a clearing where I could get a better look at the lake and snap a quick picture proving the lake actually existed.

After a minute I broke into the opening.  What do I see a few dozen yards right in front of me?  A freaking monster of a mountain lion staring directly at me.  I approached from upwind, so he knew exactly how close I was.  He turned and slowly started walking toward me to get a better look at his next meal.

Note: First Rule of mountain lion encounters… Remain calm.  Give it room to pass.  If you must, stay and fight.  Hold your ground.

Note: Second Rule of mountain lion encounters… Never, ever, turn your back on a lion.  Know where it is at all times.

Note: Third Rule of mountain lion encounters… Don’t run from a lion.  They will mistake you for prey.

I turned and high-tailed it out of there!  I figured if I could get back to the guys quickly there would be safety in numbers.

Note: Second Rule of hiking… Stay on the trail.

I was in such a hurry I forgot to pay attention to where I was going, all I cared about was I was creating distance between me and the lion.

All of a sudden I stopped dead in my tracks on top of a rock outcropping with only one way in and out.  I looked around… I was cornered and lost.  (…and as scared as I’ve ever been in my life!)

I remembered I had the trail map and GPS- Duh!  I looked around and didn’t see the lion, so I took a few bearings and took off at a very quick pace yelling “lion!” -- in a very high pitched voice -- to warn the others.  On my way back toward the trail I came across Scooter who was off the main trail.  He was lost too!

He’d asked if I saw Woody who went to catch up to me at that lake.  I said no I hadn’t seen him, but I had seen a lion!  Then I asked where Roger was… he was waiting for us about a quarter mile back.  My heart was still racing, and I wasn’t in any mood to go back toward the lion to look for Woody, I wanted as much space between me and the lion… I headed back to where Roger was.

After a few minutes I started to calm down.  I realized I no longer had to out run the lion as long as Woody was between us and the lion!

Note: Third Rule of Hiking… Never leave a man behind.

I got my courage back and Scooter and I set off to find Woody yelling his name every few minutes for over a quarter hour.  We finally sighted him way off the main trail in a swampy area.  I went in after him… looking over my shoulder with every step after noticing all the bear and lion tracks in the mud.

Finally, all 4 of us were back together on the trail and within an hour we were back to the trailhead where Woody and Roger jumped into their golf cart and Scooter and I jumped in ours as we took the lead for the 12 mile trek back. 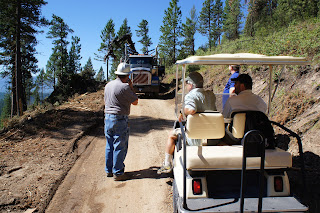 Picture a working logging road.  It climbs at very steep grades with hair-pin switch backs every so often which changes direction to stay on the face of the mountain.  The single lane road was a slippery combination of dry dirt and gravel with heavy ruts.  There are no guard rails or buffers of any kind.  Basically, the edge of the road plummets 8,000 to the bottom of the cliff!

After a few minutes we came to the first switch back.  These turns were much easier on the way up because of the limited speed we could get out of the golf carts.  Scooter slowed our golf cart to a crawl to negotiate the hairpin turn.  For a split second the cart began to go into a four wheel drift on the road.  The tires bit, we both sighed, and went on.

Behind us Woody approached the turn, took his foot off the gas and pressed on the break.  It didn’t move – the cart was still accelerating from its momentum.  He pressed again – nothing!  Both he and Roger looked down at the break and realized Woody’s camera fell out of the cubby hole it was in and lodged itself behind the brake pedal.  There was no time, the turn was on them.  Woody cranked the wheel hard to the left; the wheels skidded on the dirt and would not bite.  Then the cart rose up on two wheels at the apex of the turn, still being driven by momentum down the steep grade. 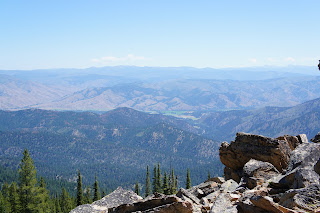 Woody leaned out as far as he could.  Roger did everything he could to move his center of gravity toward the driver side.   With tires screeching and gravel flying from the two wheels remaining on the ground, the cart was sliding toward the edge of the cliff.  Then all of a sudden the tires bit into the dirt and snapped the golf cart down the straight away.

No one said a word the rest of the way down the mountain…  We were a bunch of scaredy cats!

To see the actual GPS tracking of our expedition please visit http://connect.garmin.com/activity/200673980

Posted by bradypolansky.com at 1:02 PM