It's the Little Things That Win Championships 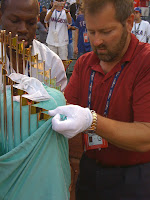 Last night (written in October, 2010) the National League Champion San Francisco Giants beat the American League Champion Texas Rangers in a best of seven series to become the 2010 World Series champions.  The best team won, although, living in the Dallas area, I was pulling for the Rangers.

What you may not know about me is I have the privilege of working with the major sports leagues in my spare time (I'll save that story for another blog.)  Last night I had the honor of preparing the Commissioner's Trophy before it was awarded to the World Champion Giants.  During events like this I get an opportunity to talk one on one to the players, coaches and owners of many sports franchises.

Over the past two decades it is funny how similar the message is from these people who reach the pinnacle of their profession.  Many begin by thanking God for giving them the talent to do what they do.  Most go on to say that everything they've done since they were a kid lead them to this.  Then, almost everyone, can't believe how lucky they are to have success.

Let me put it another way, the difference between being in the minor leagues and major leagues is such a small difference.  Think about this, hitting is all about a batting average.  At a .250 batting average you are pretty good, but not a regular major league player.  However at a lifetime .300 average you are likely to be enshrined in the Hall of Fame.  What does that really mean?  Well, if at 20 plate appearances you get just one more hit than the next guy, you'll be in the Hall of Fame.  1 in 20.  Think about it.

Don't sit on the bench and watch others contribute.  Just think, if you perform just one more time out of 20, perhaps you could be in the Hall of Fame someday.
Posted by Brady Polansky at 8:00 PM